Summary: Asians247 is a bare-bones site that does one thing well; it delivers you hot Asian girls at low prices. 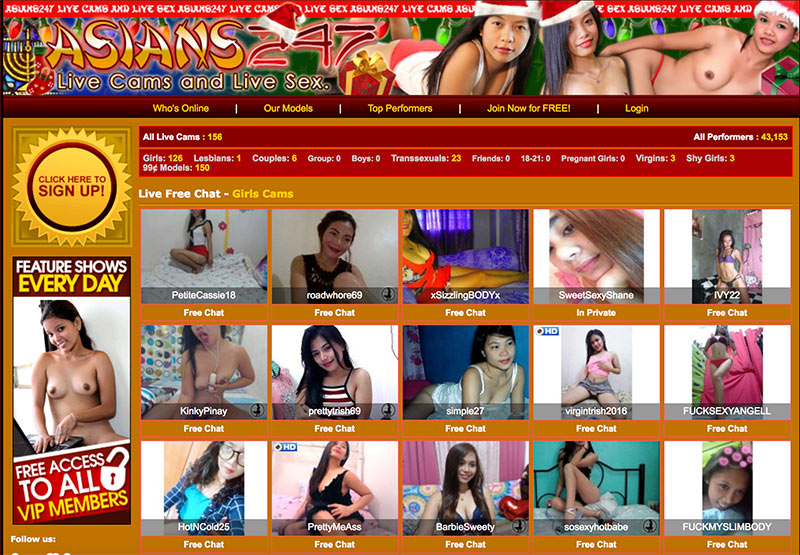 Models on Asians247 set their own rates for paid shows. These shows include:

Payments on this site are in real world currency. There is no token system and no math, which we appreciate. While models are supposed to set their own prices, we found uniform results throughout the site. That said, the prices were extremely low, far below most cam sites.

Public chats on this site are free, but there’s not much going on there. The action is all in the paid shows.You can use either PayPal or a credit card for payment, and the minimum buy-in is $19.95. All streaming charges are opt-in. A prominent banner is displayed warning that you’re accessing a paid feature, and you have to click a button to confirm.

Asians247 also has a VIP pass. This unlocks all pre-recorded videos across the site, and gives you free access to streams from models who participate in the VIP program. Prices for a VIP vary depending on how long of a membership you buy. An entire year will run you $95.40, or $7.95 a month, while a single month’s membership costs $19.84.

Autobill Warning: VIP passes automatically renew when they expire. Make sure to change your settings to prevent this, or you may find yourself paying far more than you intended. 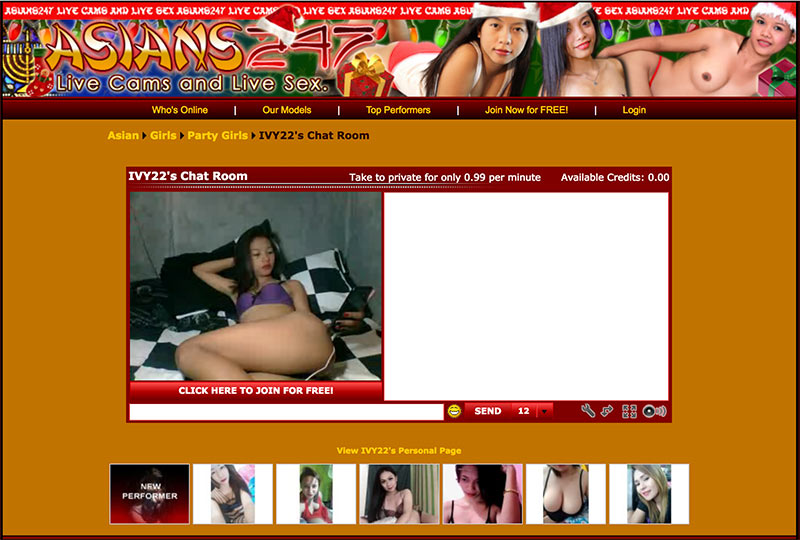 There are a total of 43,153 models on Asians247.com, with 166 models online at the time of this writing. 139 of these models were solo female, 19 were transsexual, 1 was a lesbian couple, and 7 were straight couples. This site does have over a thousand male models, but none of them were online when we wrote this review.

As you may have guessed, Asian247’s models are strictly Asian. We’re guessing you’re okay with that, since you’re reading this review. From what we’ve seen, this site should appeal to straight men and lesbians who want to jerk off to hot Asian girls. Straight women and gay men won’t find much here to excite them.

Asians247 offers three types of paid shows, as well as other features including:

Asians247.com loads slowly, and we’re not sure why. The front page is similar to other cam sites, with a thumbnail-based layout. Tags on the thumbnails will let you know whether the model is in public or paid chat, but mousing over them won’t give you a preview. When you click on a thumbnail, it loads the model’s live chat. If they’re in a paid chat, you’ll be prompted for payment at this time.

All models are shown on the main page by default, but you can filter by gender by clicking the categories on the top of the page. Other search features are limited, but many of the traditional tags like hair color and ethnicity aren’t really needed on this site.

The chat rooms are flash-based, which makes them load slowly and requires special permissions. This also cripples an otherwise well-scaled mobile site, since iPhones and some Android phones won’t run flash.

When it comes to video quality, the old saying “You get what you pay for” applies here. Many of the model streams are highly pixelated and have no sound. Others have poor internet connections with tons of lag. Even when you find a model with a good camera and connection, you’ll be watching a tiny video screen that’s smaller than the text chat box.

Because most features are paid, the only advertising on Asians247 is for the site’s VIP program. These ads are minimal, and won’t distract you from the models.

Asians247 is a bare-bones site that does one thing well; it delivers you hot Asian girls at low prices. The video quality tends to be sub-par, but with the large selection of models there are still plenty of good cams available.