Inside the CamSoda Labs

Right now adult cam sites focus mainly on connecting users through audio and video via a high-quality live stream. But actual sex involves your other senses also. In order to deliver on the promise of adult cams pioneers in the sex industry are trying to bring those other senses into the experience. With the aid of some cleverly devised tech, future adult cam consumers will be able to have a tactile, mutually pleasurable experience with a model on the other side of the world. We’re seeing the beginning of this with the introduction of teledildonics - “smart” sex toys which can be programmed to execute a sexual script or respond in real time to the control of a remote user. Major sites like LiveJasmin and ImLive have already incorporated this technology into their platforms. Right now it’s just for a few models of female toys, but all signs show that the future of the cam industry will include a wide variety of smart toys and other far stranger devices.

On the forefront of this bizarre sexual frontier is one of the newest large cam sites, CamSoda. They’ve been quick to experiment with new technology. Camsoda was the first site to feature a fully VR compatible cam show. They’ve also embraced teledildonics and incorporated popular smart toys from OhMiBod into their platform. While these offerings are cutting edge, they aren’t too crazy if you’ve been following the direction the cam industry is headed. Where things get really strange is inside the CamSoda Labs - actually a blog where they showcase their latest, strangest, funniest sexual experiments. My first visit to the labs site left me confused. It was actually hard to tell if some posts were tongue-in-cheek jokes, or if these strange projects were the real future of interactive sex. After some more research it's clear the correct answer is a bit of both.

One of the strange innovations of the CamSoda labs is the ability to capture an oral performance and then replay it on a new device. That’s the idea behind O-Cast, which actually requires that you lick your phone as you would if you were going down on a person and not a block of plastic. Once licked, the process is recorded by the O-Cast app and added to CamSoda’s digital cunnilingus library. It can then be transmitted to a LoveSense “Lush” Bluetooth egg. If you’re like me you will need this weirdness spelled out further. The process is like this:

I’m told that rather than actually licking your phone screen you can use a thumb and apply varying pressure. I would recommend this method for obvious hygiene-related reasons. I would also recommend you keep track of some good names for your recording to stand out. Some of the best I saw were: “The Transylvanian Kiss”, “Pussylicker 2000”, and “I'm....Licking my phone now? Is this who I am?” 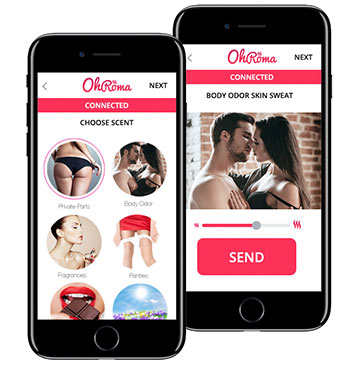 Sure, I guess you could make the case that the sense of touch is an important part of real sex. But what about the really critical part: what about the sense of smell? What use is the ability to feel the sensations of sex if you can’t smell it also? CamSoda has us covered there also, with OhRoma. This device is basically a Bluetooth gas-mask, but the air canisters hold different scents of your choosing. The site claims there will be over 30 scents, and advertises sensual smells in categories like “aphrodisiacs”, “body odor”, “panties”, and “private parts”. The mask is designed to be worn in conjunction with a VR headset and synched with a teledildonics device so that scents are deployed in synch with the sexual experience being simulated.

Currently this is still in development, so you’ll have to wait a while before you dress up like darth vader, put a robotic silicone sleeve on your dick, and inhale the strong smell of panties. But if you’re really enjoying contemplating that mental image you can pre-order the device. It will be paired with an app which will sync to the necessary smart sex toy and video feed.

As it turns out holographic technology is advancing quicker than anyone could have predicted, and its applications go even further than reviving Tupac. You can now purchase hologram projectors for your phone or tablet for as little as $1.50. These look sort of like glass pyramids which sit atop the projecting device. The holographic video is captured and displayed within the central prism, which gives the appearance of a fully 3D image. Naturally CamSoda began producing explicit holographic videos for these devices. They even offer private shows from the on-staff CamSoda models.

Capturing these videos requires a complicated fully 3D system of cameras to capture the performer from different angles. So it’s not exactly accessible to the average amateur cam model in the same way that BlowCast is. And when you see these videos in action the result is a bit strange, because the 3D projection is a miniature woman, dancing there, with the weight and proportions of a grown woman. It’s a bit hard to describe how uncanny this is without first seeing it. Still, the holograms are an interesting proof of concept. I’m looking forward to the many re-enactments of star wars scenes once this tech becomes commonplace.

I picked the most technologically wild Labs experiments to feature in this article, but this is by no means a comprehensive look at the weirdness of the CamSoda Labs. There’s sexy language learning with live translations, a build-a-blowjob web app, a robot who spies on a house of professional models, and something called the “jerk shirt” which looks like it was lifted from a raunchy SNL skit.

As you might be able to tell, it’s difficult to determine how serious these are. Many of these efforts seem like a mix between a tech demo, promotional tool, and a hilarious joke. Some of the related web pages, like the BlowCast page for instance, have missing features that link nowhere, or bare-bones implementation. Yet the holograms were live on display at this years AVN show.